When inspecting films, the system can detect stapins (fisheyes), black spots, holes and other irregularities in 10 different size classes from 5 microns. The system includes a high-speed line camera and a lighting unit. The line sensor is connected to a high-performance imaging computer. The line camera and lighting unit are mounted in a protective aluminium housing, making it suitable for high-speed application in the laboratory as well as for online material testing in production.

The exposure time is independent of the transport speed of the material. The speed is measured constantly by means of a contactless inductive sensor. This can be mounted on a measuring wheel. A manual setting of the speed is therefore not necessary. 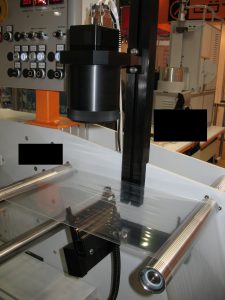